Cole thought he was Superman. He jumped “higher, higher, higher into the air” and went bam! on the edge of the coffee table. 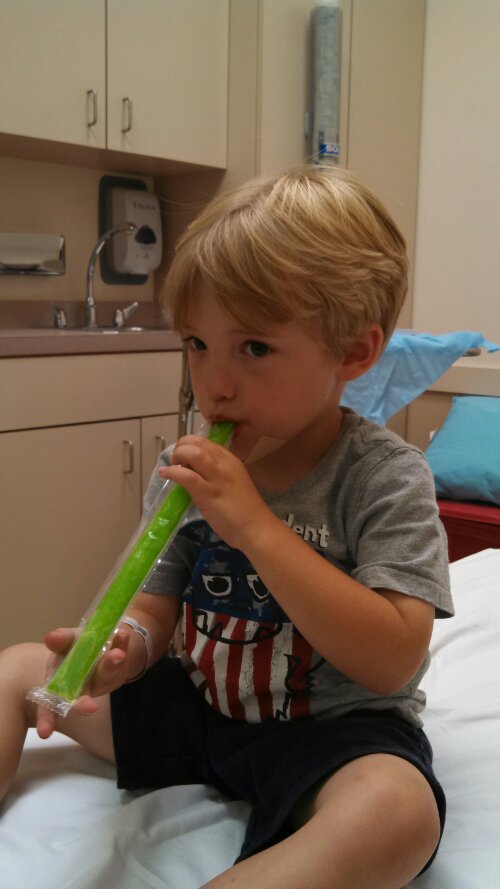 I took him to Urgent Care once Hubz got home to watch the other 2 boys. Three lovely little stitches in his chinny, chin, chin…and a pediatrician appointment for next week. He got a green popsicle out of the deal, so he was, in his words, “all good”.

Sometimes you just have to laugh

I am exhausted. Tate was up around 3 am this morning scripting away in his room. Now that he and Jake share a room, though, I need to be careful about that scripting. Sometimes it gets very, very loud. Tate has very little volume control. We are trying to work on it, but he’s just a naturally loud, boisterous person. I can’t really change that.

Anyway, his scripting started to escalate. I decided to go in. I popped my head into their room and Tate greeted me happily, “Hey, there, Mommy!”. I put my finger to my lips to signal quiet. I gestured at him to come down off of the top bunk and follow me. “JAKE’S SLEEPING, MOMMY!” (Yes, he shouted it.) Thankfully, Jake snoozed through that. I got Tate out of the room and snuggled into bed between me and Hubz. At first I thought he’d go back down easily. He burrowed in the blankets and did his little going-to-sleep sensory thing. (Kind of like a dog walks in circles 3 times, Tate bounces about 3 times to get comfy.)

He was quiet for about 30 minutes. Then he sat bolt, upright and cracked his neck. *shiver* At the same time, Hubz and I whispered, “Tate, stop!”. Tate responded, “Awww, puppets!” I know it’s a script from watching “Max & Ruby”. Oh yay. He laid down, only to pop up repeatedly over the next 30  minutes or so with a script or a neck-crack.

Hubz grabbed pillows. “C’mon, Tate, we’re going to go sleep in the basement.” I mumbled my thanks and tried to drift off to sleep. I was able to get in a little more rest before Jake moseyed into my room just shy of 6 am. He wanted to tell me that Tate was missing. I relayed the story about Tate’s having a rough night. Jake nodded his head in acknowledgement. “Oh, I get it! Tate was having his brain go crazy!” (Remember, Jake uses that phrase when he is trying to explain how his ADHD is affecting his focus and thought.) I tousled Jake’s hair and hopped into the shower.

A little later I was helping Tate get dressed. He is doing most of it on his own these days, but he still needs a little help making sure everything gets on the right way. As I was getting his socks ready for him, I smelled something a little foul. I asked if someone had passed gas. Of course, all 4 of the male-folk in my vicinity started to giggle. Jake shouted, “I did NOT FART!” Cole giggled, “Someone is stinky!” Hubz immediately said, “NOT me!” Tate giggled and smiled. “I did it. I tooted out of my bottom.”

At least we ended the morning with a giggle…even if it was a little smelly for a bit!!

Mama Is Only Human

Musings of an Aspie

one woman's thoughts about life on the spectrum

Exploring the Colorful World of Autism

Just a redheaded dad trying to sort out parenting and the universe.

Swim in the Adult Pool

Finding humor in an ADHD life without water wings

Babbling in the most coherent way possible

In the not-so-distant future, you'll wish you wrote down everything your kids said. Now's your chance!

“Sometimes the dreams that come true are the dreams you never even knew you had.” ~ Alice Sebold

sharing resources to create caring classroom communities for all children

Tales from the car rider line and other stories

Dealing with the endless "oughts" of parenting and autism.